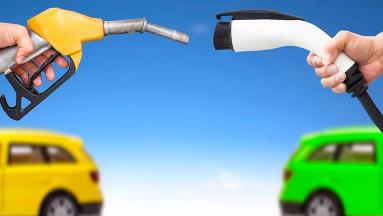 Is it the cost of the car? The range anxiety? The charging time? The hesitancy of committing to a technology different from that which we’re comfortable?

Maybe it’s one of the above reasons, or a few, or none of the above at all but some other reason - but the great age of electric vehicles is here and it looks like the vast majority of the U.S. is not quite ready or willing.

Our Tasca Parts Center customers have strong opinions on the subject as well. In a recent poll asking their interest in owning an EV, hybrid, or biofuel vehicle, respondents could rank their interest on a scale from 1 (“Ha! Not if it was the last vehicle on Earth”) to 10 (“I already own one and love it!”).

If we’re to go by the numbers, the future of electric in this country is looking pretty grim.

And yet . . .  despite the majority of signs pointing the other way, auto manufacturers are still designing and producing new BEVs, HEVs, PHEVs, and FCEVs (if these acronyms are new to you, don’t worry - you’re not alone. We define them for you below).

So, what is keeping us from going electric?

Any electric car you see on the road today (as of the writing of this article, at least) is going to fall into one of four categories:

Battery electric vehicles (BEVs) run solely on an electric battery and electric drive train. Because BEV’s do not require gasoline, they don’t have a gas (petrol) internal combustion engine, fuel tank, or exhaust pipe. The electricity used to power the vehicle’s motor is stored in the onboard battery (or batteries) and is obtained from an external power source (usually the public power grid).

Plug-in hybrid electric vehicles (PHEVs) run primarily on a battery that is recharged by plugging into the power grid, but they’re also equipped with a fuel-powered internal combustion engine. The gasoline engine can be used to recharge the battery and to replace the electric drive train when the battery is low and more power is required.

Hybrid electric vehicles (HEVs) have two complementary drive systems - a gasoline engine and fuel tank, and an electric motor, battery, and controls. The two systems can run simultaneously to turn the transmission. However, unlike the BEV and PHEV, the HEV can not be plugged in to recharge the battery; the HEV battery can only receive energy from gasoline and regenerative braking. 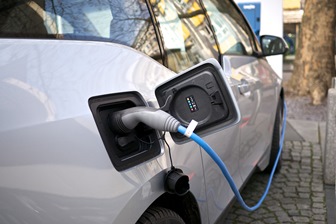 Alright, then, let’s first look at some of the reasons for going green given by advocates of electric vehicles:

Better for the environment

Current data shows that, even with higher initial global warming emissions resulting from production of the BEV lithium-ion battery, battery electric vehicles are cleaner from cradle to grave than gasoline cars. According to a recent study by the Union of Concerned Scientists, electric vehicles sold today - on average - produce less than half the global warming emissions of comparable gasoline-powered vehicles. What’s more, the UCS says that “excess manufacturing emissions are offset within 6 to 16 months of driving.” (See Cleaner Cars from Cradle to Grave: How Electric Cars Beat Gasoline Cars on Lifetime Global Warming Emissions)

Going electric promotes energy security. In 2016, about 65% of the energy generated in the United States came from fossil fuels (coal, natural gas, petroleum, and other gases), about 20% from nuclear energy, and about 15% from renewable energy sources (U.S. Energy Information Administration). However, more than half of the 65% generated from fossil fuels came from domestically-sourced natural gas, and almost as much from domestically-sourced coal. Only 0.6% of the U.S.’s energy last year was sourced from petroleum.

Interestingly, of those 40% of consumers surveyed by Car and Driver at the end of 2016 who did have knowledge of EV cars, 85% didn’t think the current charging network was adequate, 83% said that today’s EVs cost too much, and 74% said charging takes too long. So, why don’t we look at some of these reasons people are giving for shunning vehicles in the EV family.

Ah, range anxiety - the fear of running out of charge. A valid cause for concern for many Americans - especially for those who live in the wide swaths of this country where daily travel exceeds the driving range of most plug-ins and charging stations are few and far between.

As of the writing of this article, and according to the Alternative Fuels Data Center, the United States currently has 15,813 public charging stations compared to around 150,000 gas stations.

Looking at the map, you can see that most of these stations are aggregated on the coasts:

Plug-in electric vehicles are powered by motors that operate off of lithium-ion battery packs that generally supply 300-400 V and are in the 24-35 kilowatt-hour (kWh) range. The batteries can be charged from three types of chargers, categorized as Level 1, Level 2, and Level 3.

Level 1 and Level 2 chargers are factory-installed into the vehicle and convert AC power into DC power used to charge the vehicle’s battery.

When all's said and done, unless you have a Level 2 EVSE station at your house, fully charging the typical EV using Level 1 from any standard 120-V outlet could take upwards of 20 hours.

And what about those drivers who have to park in the street, such as those who live in apartments or condos, who don’t have easy overnight access to outlets?

A Note on Energy 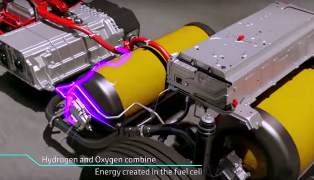 You can’t talk vehicles without talking energy. And any discussion about energy is going to involve discussions about (among other hot topics) sustainability, environmental stewardship, carbon footprints, labor, and national economic security.

The hard truth, however, is that our #1 source of energy for vehicles - oil - is nonrenewable. The more oil we use, the smaller the remaining supply. This fact alone, notwithstanding discussions about carbon footprints and environmental friendliness, should be reason enough to develop renewable sources of energy  - especially if future generations are to meet their energy needs.

Electricity is just one of many options - alongside biodiesel, ethanol, hydrogen, and natural gas - that researchers are exploring to provide fully renewable, cleaner, environmentally-friendly, efficient, cost-effective sources of energy.

This Ain’t Your Grandma’s Car

Meanwhile, electric vehicle and alternative fuel technologies are advancing rapidly. The highly acclaimed all-electric 2017 Chevrolet Bolt has an EPA-rated range of 238 miles (more than the Tesla Model S) and has a starting price at $37,495 (less than half the price of a Tesla Model S) before the federal tax incentive of $7,500.

According to GM, the Bolt takes about 9 hours to complete a full charge from empty using a 240-volt, 32-amp Level-2 charger. The car’s long cruising range means that most owners can go about their daily activities and easily make it home to charge their Bolts overnight. As tested by Motor Trend, a Level 3 charger can give the Bolt 90 miles of range in 30 minutes, 160 miles in 60 minutes, and a full charge in two hours. Bolt owners can also pay extra and opt for direct-current fast-charging capability via a Combined Charging System (CCS) port.

Alongside the Chevrolet Bolt, at least 20 other electric cars and plug-in hybrids exist - varying in price, features, and range.

With oil prices low, electric vehicles still priced above those of comparable gasoline-powered vehicles, and the inconvenience of charging stations, maybe Americans aren’t going electric not because we don’t want to, but because we don’t have to.

This luxury of choice, however, is disappearing in other countries. Citizens in countries like France, Mexico, China, India, and Spain - especially those living in and around major urban areas - are facing increasingly stronger restrictions regarding vehicle usage. Mayors in Paris, Mexico City, Madrid, Athens, and Oslo have already begun the crack-down on internal combustion engines, especially those that use diesel, in an attempt to curb carbon emissions and greenhouse gases produced by vehicles. As more markets begin to demand vehicles powered by electricity and other renewable sources, more automakers are going to supply such vehicles. America may no longer be the ringmaster in the global automotive industry.

Again (and regardless of concerns about carbon emissions and air quality), this large mass of land and water that we call home IS going to run short on oil at some point. By definition, our planet’s oil - as a non-renewable resource - is finite. Fixed. It’s all we’ve got and we ain’t got no more. No choice exists but to explore alternatives to oil.

Our promises to our customers

You are our #1 priority! The Tasca family always puts customer service above all else, and stands by our promise to deliver:

With 40% or more off list prices everyday, our OEM prices are seriously among the lowest that you’re going to find.