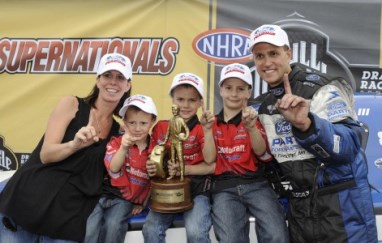 Keep an eye on a raceway near you for our Tasca Racing team!

Bob Tasca III and his Ford Shelby Mustang are scheduled to compete in eight NHRA events this 2017 season.

Learn more and purchase tickets at the official NHRA website.

Now headquartered near Charlotte in Concord, N.C., Tasca Racing was founded in 1962 by legendary Ford dealer Bob Tasca, Sr. of Rhode Island. While most well-known for coining the term “Win on Sunday, Sell on Monday”, Bob Tasca, Sr. is also widely recognized for helping bring Ford to the forefront of performance during the golden era of racing in the 1950’s and 1960’s with such vehicles as the 428 Cobra Jet, the Thunderbolt, Tasca Street Boss, and the Mystery race cars.