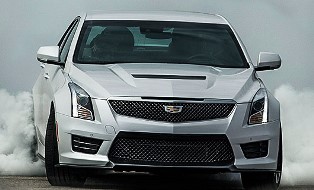 Cadillac has ALWAYS set the standard for the American automotive industry.

One of the oldest automobile brands in the United States, Cadillac was founded from the remnants of the Henry Ford Company in 1902 by William Murphy, Lemuel Bowen, and Henry Leland.

Even from its fledgling days, Cadillac demonstrated superior innovativeness, leading the automakers in technological advancements and paving the path for precision manufacturing.

Top Reasons to Buy a Cadillac

Cadillac’s legacy of innovative engine technologies began in 1902 with the introduction of its 10 hp single-cylinder engine.

In 1915, the brand produced the first water-cooled V8 engine.

In 1930, Cadillac designed and manufactured a notably quiet, yet powerful V16 engine.

Over 100 years later and Cadillac is STILL leading the way in innovative engine technologies.

Cadillac’s all new 3.6L V6 was recently named one of Ward’s 10 Best Engines. Every year (for the past 22 years) Wards examines and reviews dozens of engines from top automakers and compares data on power, fuel efficiency, new technology and refinement. Engines are scored on horsepower, torque, comparative specs, noise attenuation, fuel economy, and the application of technology.

The fourth generation of GM’s acclaimed DOHC V6 engine family, the Cadillac 3.6L V6 incorporates new features and technologies for enhanced performance and efficiency, including direct injection, continuously variable valve timing, and Active Fuel Management. In addition, a number of features – including the all-new cam drive system and high-flow intake manifold and acoustic cover – contribute to making the 3.6L V6 one of the quietest engines today.

“Where the racetrack meets the road.”

Designed with Cadillac’s eye for design and powered by the automaker’s leading-edge engine technology, the V-series brings luxury to the racetrack. And to the street.

Sophisticated lines, precision handling, effortless thrust – the 2016 CTS-V is armed with a super-charged 6.2L V8 engine and is the pinnacle of Cadillac’s performance design.  According to Consumer Reports, “The high-performance CTS-V gives any $100,000 German super-sedan a run for its money . . .”

Essentially, if you’re looking for high-end performance, luxurious detail and comfort, and superb engine technology, Cadillac’s V-Series (the CTS-V and the ATS-V) has the cars for you.

The President of the United States Travels in a Cadillac

The United States presidential state car (aka “The Beast”, “Cadillac One”, “First Car”, and “Stagecoach”) is a Cadillac.

Granted, it’s a custom-built Cadillac – but a Cadillac nonetheless.

Always on key with its technologies, Cadillac offers a number of standard and optional safety features for its fleet of cars:

Tasca is a fully authorized Cadillac dealership and OEM parts distributor. Family-owned and operated since the 1950s, Tasca always puts the customer first.

Whether you're purchasing a Cadillac or looking to replace a part, give us a call and we'll give you our best.