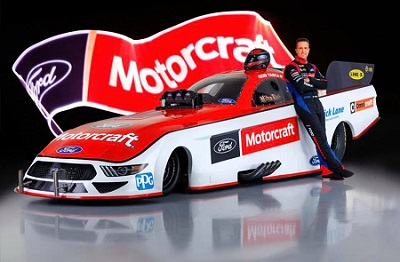 A New Year, a New Car, a New Race Season to Dominate

“I’ve never been more confident heading into a new season,” said Tasca. “Ford Performance has stepped it up big time with the new Mustang Funny Car body, and it will make our team even stronger in 2019. The level of competition in this class is incredible, but with the support of Ford, and perfect execution from my team, you’ll see us claiming victory before long. We have only one thing on our minds, and that’s putting our Motorcraft/Quick Lane Funny Car in the winner circle.”

The 2019 Ford Mustang Funny Car is the first full update to the body by Ford Performance in 10 years. Bob is enthusiastic about the new funny car body and excited to test its improved aerodynamic structure on the track. 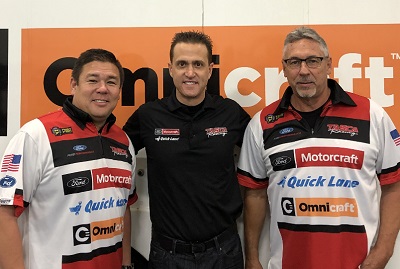 "There are a lot of improvements to the car structurally. That’s something we’ve struggled with over the years. If you look at the [old] car in the super slo-mo cameras you’ll see it start to warp and change its shape, which is not what you want. If you think about a bullet, it doesn’t change its shape as it goes through the air and you want a car to do the same thing."

In addition to the new funny car body, Tasca’s Motorcraft/Quicklane Racing team is also opening the 2019 season with a new crew member, co-crew chief Mike Green. Alongside returning crew chief Eric Lane, Green joins the team from Don Schumacher Racing and has over 30 years of experience in the industry.

“I’m very excited to be joining this team on a quest for an NHRA Funny Car championship,” said Green. “It takes dedication and resources to compete at this level, and I believe these guys truly have what it takes. I’m looking forward to a great offseason of preparation before hitting the season with everything we’ve got.”

“I’ve never been more confident for a coming season than I am now,” said Tasca. “Adding Mike Green, with all of his championship experience, alongside Eric Lane, truly strengthens my brain trust.”