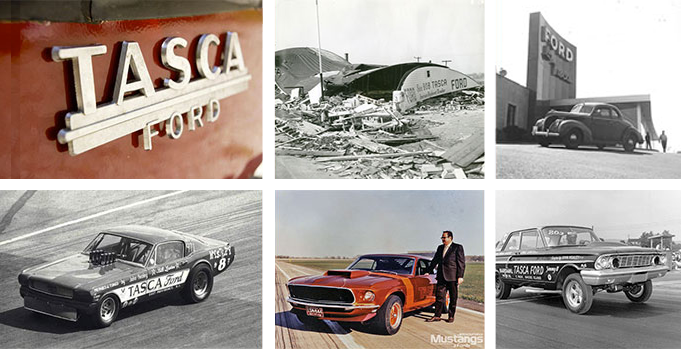 The History Of Tasca Ford

In 1953, Bob Senior sits down to write his Business Plan. Customer service is the focal point of how Bob hopes to separate himself from the competition. Bob's business plan, consists of the Ten Commandments of Customer satisfaction.

Bob's, attention to customer service begins to pay off and by the 1960s Tasca Ford had become the second-largest Ford dealership in the world, amassing sales of over 7,000 New and used vehicles annually.

The origin of Tasca Ford Racing:

In late 1961, a Tasca Employee by the name of Roy Burchfield, Sold a red 1962 406-ci/405-hp Ford Galaxie 500 4-speed car to a man by the name of Gordon Carlson. Carlson began to drag race his new ride but failed to compete against the competition of the time. Recognizing the incredible service he received at Tasca Ford, Carlson returned to Bob's shop to give his car the competitive edge he would need to start winning some races. Over the years, Carlson had built quite the reputation with the Tasca's and after a short conversation, Bob Sr decided to sponsor the young race car driver. Tasca authorized the order of some high-quality OEM engine parts and a mechanic by the name of John Healey began to work on Carlson's Galaxie after hours. Unfortunately, The relationship with Carlson soon deteriorated due to different visions for Carlson's new souped-up Galaxie. As a result, Tasca decided to race their own car in local circuits.

Bob sr. ordered a 1962 Galaxie 406 Club Sedan Super Stock Car through Ford. Bob Sr. had John Healey work on his new supercar day and night until it finally met Bob's stringent standards. The newly christened "Go Getter" ford Galaxie super stock car made its debut with an impressive 13.6/90.00. One of the most respected racers in the area went by the name of Bill Lawton. Bill happened to be at the track that day and decided to pay a visit to the Tasca pit to see what all the fuss was about. After a brief conversation Bob sr. asked Bill Lawton to drive his Ford Galaxie for the rest of the year, and as they say, the rest is history. Bill went on to win the 1965 NHRA Winternationals, where he won factory Experimental Honors.

Race On Sunday Sell On Monday

After garnering success on the racetrack Bob Sr. Once again became fixated on being one of the most successful car salesmen of his Era. From 1961 -1971, Tasca Ford Sales sold more high-performance Mustangs, Fairlanes, Torinos, Cobras, Shelby GT350's and Shelby GT500 Mustangs than any other dealer in America. Bob Sr. Attributes his success to the original ten commandments of customer service that he had included in his initial business plan in the 1950s. Three generations of family, and over 50 years, later and the Tasca Family continues to put customer satisfaction above all else.

Check Out The Evolution of Tasca Racing in Photos!

By now you should be an expert on all things, Tasca Ford!

What matters to you matters to Ford as well.  And it shows. Ford Motor consistently wins award after award for most-loyal customers and loyalty to make categories in the annual IHS Automotive Loyalty Awards.

Brand loyalty is when customers continue buying products from a company, year after year, regardless of what critics, the media, friends, and family may have to say about the company.

As automakers vie for consumer loyalty and dollars in a fast-moving marketplace, Ford has managed to retain a competitive edge. Ford Motor continues to create an experience that customers not only enjoy but – more importantly – are also hesitant to trade.

Let’s look at some of the reasons why Ford stands out:

The company employs a global network of experts to ensure that it fully knows its customers – what they like to do, what music they listen to, what types of food they eat, the clothing styles they wear, and where they shop.

Ford also maintains an active social media presence, engaging its customers and giving them opportunities to share their experiences and opinions. Employees and customers are encouraged to have open dialogues and to contribute constructive criticisms alongside positive experiences.

Ford Looks to the Future

Ford monitors global market trends, shifting consumer interests, and social and political developments in order to guide future product and technology developments. The company continually works to build affordable vehicles that satisfy the wants, needs, and desires of its customers.

Beginning from the pioneering days of Henry Ford’s assembly line, quality has always been an integral component of Ford’s business. Every Ford car, truck, and OEM part is tested to meet the highest standards of quality and functionality.

Ford embraces challenges with a willingness to fail in order to thrive.

Technologies like SYNC AppLink, MyKey Do Not Disturb, MyFord Touch, inflatable seat belts, and active park assist are all part of Ford’s efforts to lead the industry instead of following the competition.

Tasca Parts Has the Right Part for You

If you’re looking for genuine OEM Ford parts, Tasca Parts Center has what you want. We sell only OEM parts and pledge to have the right part at the right price at the right time for your vehicle.